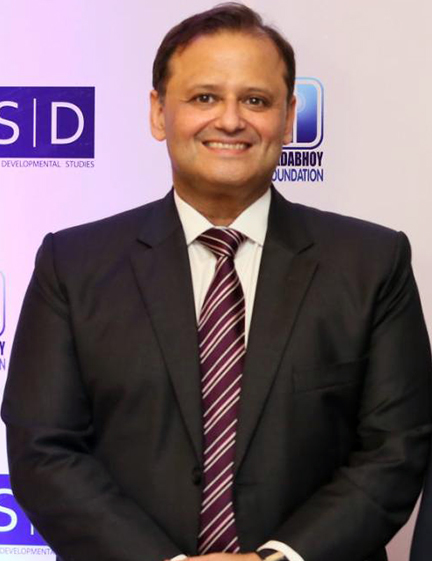 Roger Dawood Bayatbrings with him International Corporate experience spanning 30 years. A proven leader and manager, he is an effective communicator who has built a notable and extensive network within the financial and business community in Pakistan, Middle East North Africa South Asia (MENASA), South Africa and United Kingdom.

He consistently demonstrates entrepreneurial thinking and has the capacity to hold and pursue many ideas in parallel whilst achieving business excellence and deliverables in a short span of time. Core strengths include the ability to originate business; interact with decisions makers, raise private equity and debt transactions, brand building, marketing and strategic planning.

In 2003, he joined Emirates Investments Group (EIG), UAE, under its Chairman, H.E. Sheikh Tariq Al Qassimi (Sharjah Ruling Family) and was provided a mandate to develop and establish financial entities in Pakistan. Within the first six months, he completed an acquisition of a listed brokerage entity Trust Securities & Brokerage ltd. There after initiated the process and worked closely with the regulatory authorities to establish an Islamic Bank – Emirates Global Islamic Bank and Takaful Pakistan ltd., the second Islamic insurance company in the country.

Emirates Global Islamic Bank Ltd. (EGIBL), the recipient of the 1st commercial license for Islamic Banking in Pakistan where EIG has the unique distinction of being the only non-banking entity to be licensed. EGIBL commenced operations in February 2007, grew to 60 branches operating in 31 cities in 18 months. In 2009 he initiated the process for a merger and working along with EGIBL was successfully merged with a subsidiary of Al Baraka Banking Group Bahrain, to form Al Baraka Bank Pakistan Ltd.  The notable achievement was hailed as ‘the first Islamic Bank merger in the country’.

In 2014, Roger resettled in Karachi to develop PE/VC opportunities using his financial acumen and mentored first time entrepreneurs in developing their businesses. In 2016, joined Ijara Capital Partners as Chief Operating Officer, to establish a Private Equity USD 100 Million Dollar Fund for investments in Healthcare, Education, FMCG and Real Estate. Subsequently in 2018, he has been advising Family Groups on restructuring and investments in health care, education and actively involved in a think tank and philanthropic causes in Pakistan.

Roger Dawood, studied at Grenville College UK. a private boarding school and went on to read Economics from American College of Switzerland, Leysin, Switzerland and Post Graduate Degree in International Marketing from the Business School, Oxford Brookes University, U.K. He received ‘the Certified Director Education’ by the Pakistan Institute of Corporate Governance and sits on the Board of Pakistan based companies.